"Our bookkeepers have never physically been to the restaurant for bookkeeping. As a chef/owner, I personally spend no more than 15 minutes a week on bookkeeping. If it weren't for PlateIQ, our team would probably spend 12–15 hours per week."
David Barzelay
Chef And Owner
Customer Story
Michelin-Starred, Multi-Concept Dining Group 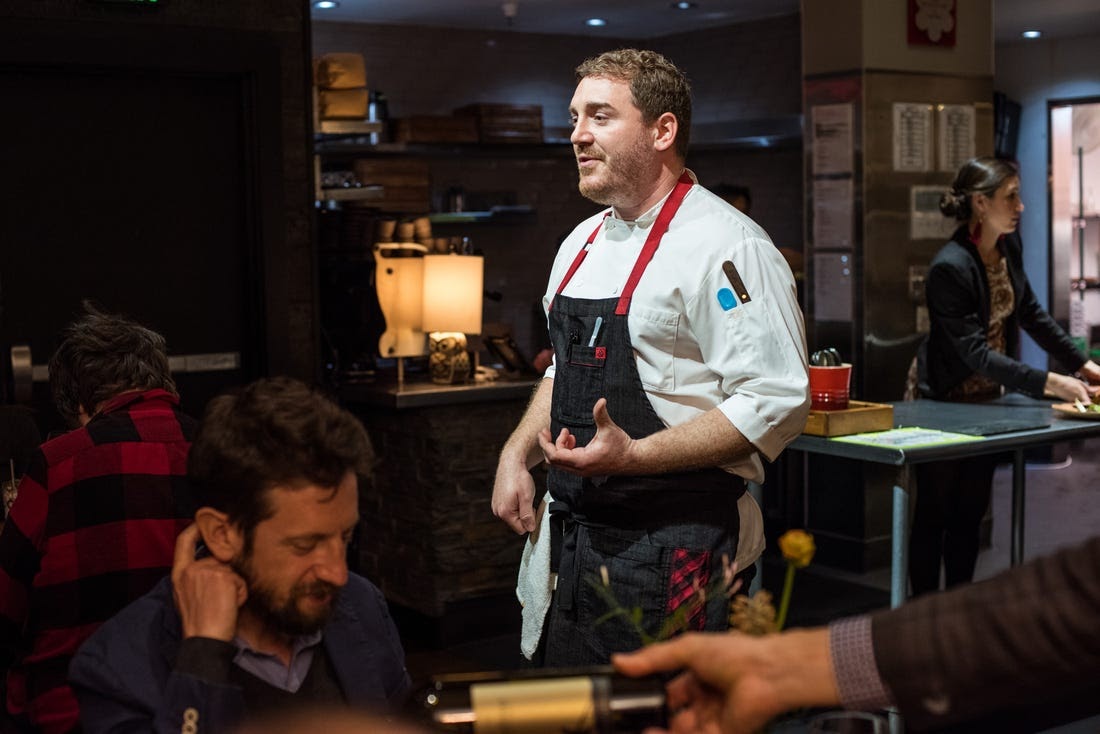 Listen to this story

The restaurant scene in the Mission District of San Francisco was very different 20 years ago. Burritos, pupusas, and dive bars were more common than ambitious restaurants with craft cocktails and amuse bouche plates. Today, that scene has changed dramatically, with the Mission boasting not one, but three Michelin-starred restaurants.

One of those Michelin restaurants, Lazy Bear, opened in 2014 and has been one of the toughest reservations in town ever since. Best known for its unique communal setting and dinner party concept, Lazy Bear’s cuisine centers around nostalgia and a reverence for the wild, utilizing a wide variety of preservation methods and inventive techniques. The culmination of the concept and high level execution makes it one of the most unique dining experiences in the world.

From Underground To Brick and Mortar

"I got really into cooking at law school and then I was a lawyer for eight months. I got laid off in 2009 and the job market was terrible, but I had a great severance package. So I started staging at restaurants for fun, not intending that it would lead to anything. It was just to pass the time and learn and then I just never went back."

He began hosting dinner parties in his apartment under the name “Lazy Bear”, an anagram of his last name. He expanded into a casual pop-up dining experience hosted at a secret location, where for several years he honed his cuisine and built a following.

"I was looking for the right space for about three years. And at the beginning of that process, we started raising some funds when we thought we had a promising spot."

In 2014, he took over a bi-level space in the Mission that was formerly occupied by a barbecue restaurant and created a nightly tasting menu, dinner-party style. Guests mingled in the loft over cocktails and hors d'oeuvres and eventually sat down to a communal dinner downstairs.

With his new concept taking off, Chef Barzelay focussed his vision and strategy on creating repeat customers who wanted more of the experience:

"We're not trying to make money, we're trying to make customers. It's all about having a product that's compelling, has great value, and by giving people more than they think they're paying for it. We just have to make sure that they want to come back, and that's always what drives us...even if it costs us a little bit or takes us a lot of effort, we're going to make the right decision over the long term view rather than short term."

Hitting the Reality Of Growing And Managing A Complex Operation

There were many growing pains when finally opening his dream space.

Once we opened, tons of invoices started coming in and we were honestly swamped, like, we were drowning and I had no idea how to manage that.

Managing the stream of invoices was only part of the problem.  Keeping them organized and paying bills on time was an even greater challenge.  Vendors became frustrated by missed payments and invoices.

"Vendors were contacting us saying, ‘you missed this invoice, this one is late’ constantly... It wasn't like we didn't have funds to pay it. We just didn't know how to manage payments. And we were so busy and it took so much time to do that invoice processing."

Executing at the highest level is demanding of every chef’s time, which made automation a must-have.

In the early days, Chef Barzelay would spend close to a hundred hours per week setting up systems managing the day-to-day operations. Manually doing the bookkeeping as well was a complete non-starter.

Honestly, if I had to do all of that accounting, I'm not sure that I would even be interested in operating restaurants.

"Like at no point could I have handled the incredible number of demands on my time. Decision-making, guiding the team, the menus, everything else, and also doing all that bookkeeping, that would just be impossible."
‍

Multi-course tasting menus with an extensive selection of wines and cocktails requires many specialty vendors of all types.  From small local farms to broad-line distributors, a fine dining restaurant can pile up invoices quickly throughout the week.

"So in a given week, we have 30 to 40 vendors on terms and then we've got other vendors that get paid different ways. And then, some of those vendors over the course of that week, we might have 5-10 invoices with them, so really you're talking about 150 checks (that need to go out per week)."

Automating the process of digitizing, processing and paying such a high volume of invoices became paramount.

Without a dedicated person that could really manage the process, one of Chef Barzelay’s business partners found a real solution and Lazy Bear became one of Plate IQ’s first customers.

“It wasn't till we got on Plate IQ that it (became) a manageable process”.

Taking it a step further, they hired an accountant and a bookkeeper to manage Plate IQ.

"We can always look up invoices or look up anything in the past or things to be paid whenever we want to. The bookkeepers even find it helpful, even though they're accountants and that's what they do, they prefer to use Plate IQ as well. It makes them more efficient and (and requires less of their time)"

Our bookkeepers have never physically been to the restaurant for bookkeeping. I interact with them only via email

Chef Barzelay wanted to keep his team focused on creative ideas and not on keying in invoices manually. The less he and the team needed to touch the system, the better.

"Our team now spends a total of about 2 hours per week on bookkeeping for invoices from 30-40 vendors. Most of that time is just scanning and approving invoices. Of course, that doesn't include time our bookkeepers spend. As a chef/owner, I personally spend no more than 15 minutes/week on bookkeeping. If it weren't for PlateIQ, our team would probably spend 12-15 hours/week. It just makes it so much more efficient. I don't have to do anything because the last thing I want to spend my time on is paying bills, invoices, processing, all of that. I want it to happen automatically, which is exactly what we get from Plate IQ."

And the best part...

The best thing I can say about it is that. You're like, ‘Hey, can you talk about Plate IQ?’ And I'm like, I have nothing to say about it because it all happens automatically and I don't have to (expletive) with it.

Expanding An Empire With Plate IQ

True Laurel opened in 2018 just a few blocks away to rave reviews as Chef Barzelay flipped his focus to cocktails with a small bar menu.  Esquire magazine named it one of the Best Bars in America and the San Francisco Chronicle has placed it in the Top 100 Best of the Bay Restaurants.

Plus, being married with three little kids and a passion for woodworking keeps accounting and bookkeeping as the last thing he wants to do with his free time.

If you're interested in dining at Lazy Bear, make your reservation today!