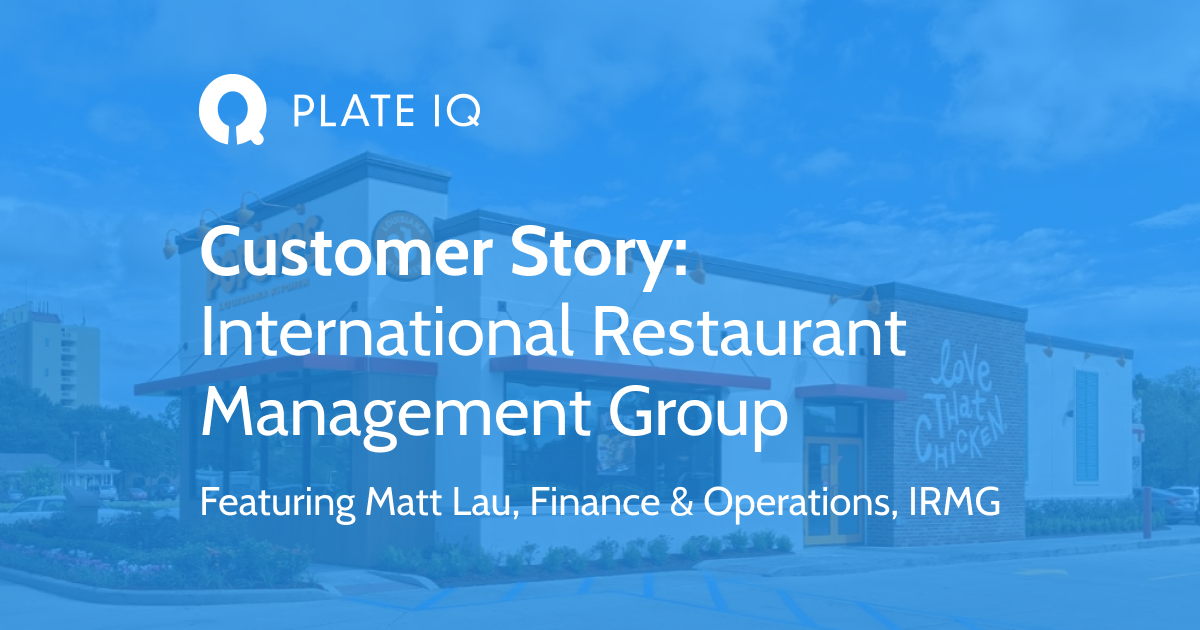 International Restaurant Management Group (IRMG) is one of the rare quick service restaurant (QSR) companies that can successfully operate multiple brands. The restaurant group runs concepts like Suki Hana, Wok A Holic, and Kelly’s Cajun Grill, as well as franchising Burger King and Popeyes. In addition, IRMG has managed to open co-branded units, which has allowed for greater economies of scale among their 140 locations across 25 US states and internationally.

In 2015, Matt Lau, Finance and Operations at IRMG, implemented Plate IQ across IRMG locations and corporate headquarters. He was hoping to streamline manual workflows and reduce overhead, but Matt quickly found Plate IQ had much more to deliver than invoice automation. From invoice approval management to bill pay, spend management and actionable insights on data, Plate IQ transformed many parts of IRMG’s accounting and operations.

Before switching to invoice automation, said Matt, the accounting team relied heavily on paper. As he explained, he has seen everything.

Just getting an invoice (unspoiled and legible) to the office was a challenge across the IRMG organization. Some locations had no room to put in a computer, printer, or scanner, due to space restrictions. “Because our restaurants were not dependent on technology, we did look for something that was very mobile friendly,” said Matt.

With a team spread across the country and globe at different stores, Matt and IRMG wanted to be able to easily train staff at each location. They knew that having an easy mobile app that could take pictures might be easier for everyone than “logging in into their email, checking this or that, scanning, uploading, making sure everything was cropped properly.”

Before choosing Plate IQ, IRMG did use a different software that included an app. However, the restaurant group wanted more flexibility with how invoices could be submitted. Some locations needed to submit from mobile, some stores that had scanners wanted to send invoices in one batch, and other large broad line vendors used EDI.

The flexibility of Plate IQ allowed IRMG to “use different methods to get the invoices from California to our office in Florida, digitally. We were no longer having a one week wait where that data's just sitting there doing nothing,” said Matt.

When it came time to train the team, Matt described the process as simple for the staff. “There's not much to it when it's just snapping a picture, making sure it's for the right location, and making sure that managers have the right store access,” he said. “They can't really mess up too much."
‍

Having an easy-to-use interface makes it so much easier.
‍

“Once in a while, you'll still see managers capturing their feet with their invoices,” he laughed. The most difficult piece, according to Matt, was granting access to the correct employees at each store.

IRMG has over a hundred users on the platform. “At any given time, there are probably at least 50 people who are uploading through the different methods. And it's pretty easy to see how they're doing it, whether they're emailing, using the app, or EDI,” Matt explained.

The visibility and transparency of data on the platform allows the central accounting team to always trace what store a document is coming from, and who uploaded it. This breadcrumb trail allows the AP team to quickly contact store-level teams if any corrections or changes need to be made.

IRMG uses Sage 300 as their business management software. Previously, the AP team was using a ruler to scan an invoice and type everything into Excel by GL code. They then applied a straightforward but time-consuming manual approval process.

This multi-step process has been streamlined significantly with Plate IQ. With the application of Plate IQ, the accounting team reviews food invoices, ensuring that the GL code matches and is set to the right location. From there, they examine any outliers or exceptions before clearing, approving, and paying the invoice.

“I can't quantify the time savings, but Plate IQ transformed everything,” said Matt. “We don’t have to wait for an invoice to physically get into our office, and then for somebody to open it up. And we avoid a lot of mistakes by not having someone physically do [the ruler method].”

Under the manual AP system, explained Matt, an invoice would touch three or four people before it even got to the right person to input it. Now, AP automation allows the team to efficiently work together and minimize errors.

We still do [paper checks] in some cases, but we're able to drastically reduce the check process itself, save a lot of time, and also [offer] ACH and vCard usage.

Fewer paper checks printed and signed means fewer checks get lost in the mail. And processing payments electronically has been a welcome alternative to someone on the accounting team spending hours matching checks, line by line, with the payment register.

Additionally, some of IRMG’s vendors cut back on their net terms during the COVID-19 pandemic. “We used to have net 30 in a lot of places, and now everybody wants payment immediately,” said Matt. “Without Plate IQ, it would probably be a nightmare to try to get that payment done.”

Growth and Results for IRMG

The switch to AP Automation and VendorPay has brought benefits to both IRMG and its vendors, with Matt expressing, “Our vendors love it.”

The transparency of the payment status helped IRMG resolve issues proactively and quickly. “Sometimes vendors will be like, ‘Hey, what happened to our payment?’” described Matt. With Plate IQ, the information was at their fingertips, and they were able to tell vendors the exact day a check was cut or ACH was received. “Plate IQ helped us have all that information right there, and it prevents any hold up of food deliveries to our restaurants.”

Earning Cash Back for the Business

In addition, IRMG is earning cash back with vCard payments, said Matt. “We've probably been using the vCard for about three years now, and we probably make at least a thousand payments a month, between check, ACH, and vCard.”

That frequency adds up to some significant money back, Matt added. ‍

You know, not doing anything [extra] and getting money back is definitely a plus!

Efficiency at Scale with 2,000+ Invoices a Month

Matt estimates conservatively that IRMG is processing over 2,000 invoices a month through Plate IQ, in addition to a few other invoices the accounting team does separately.

Even though the team is processing invoices at scale, the system is offering the flexibility they need to streamline operations. “We can immediately see which invoices have been paid without actually having to go back to our accounting team and find out,” he explained. That ease of use is transforming the way the AP department and wider company is able to work together.

Finally, Plate IQ data has fueled insights across the company, even in new areas of growth. IRMG adopted some new third-party delivery business models because of changing customer behavior during the pandemic. While some locations weren’t interested in establishing off-premise business, others were able to add the new area of revenue.

“Plate IQ has been helpful, because we’re able to kind of see what the third party spend was by analyzing an uptick in food costs for stores that did have delivery, versus the ones that didn't,” explained Matt. This insight is fueled by accurate, timely invoice data.

As for the future, Matt said, “We're excited to see where Plate IQ is going. Happily, we've been able to refer to other groups to use Plate IQ as well!”

Matt’s enthusiasm stems from the wide-ranging impact Plate IQ automation has had on IRMG’s accounting and operations. Whether bill pay or actionable insights on spend, the future is bright for IRMG’s future growth.

Interested in seeing what AP automation could do for your business? Scroll down to sign up for a personalized demo today.